This post is the next installment in a series about my trip to Thailand to volunteer helping elephants. 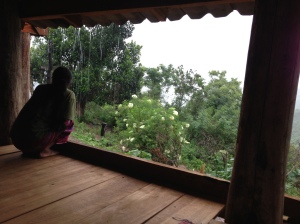 One of my favorite movies is the 1982 Ridley Scott film Blade Runner, with Harrison Ford as a world-weary detective in what is probably the first futuristic noir film ever made.

Blade Runner has one of the best death scene soliloquys in cinema history, delivered by Rutger Hauer as Roy Batty, an inhuman “replicant” who is being hunted by Harrison Ford’s character. What’s beautiful about the soliloquy is that Batty has lived a very short life and is not even human, and yet in recounting some of the tiny but glorious moments he has experienced in his brief time, he understands what it is to be truly human. Here’s his last words:

“I’ve… seen things you people wouldn’t believe… Attack ships on fire off the shoulder of Orion. I watched c-beams glitter in the dark near the Tannhäuser Gate. All those… moments… will be lost in time, like… tears… in rain. Time… to die…”

When it’s my “time… to die…”   here’s a partial list of some of those tiny but glorious moments in Thailand—the ones that will never get their own blog posts—but that have made me grateful I have lived them. These are some of the moments that remind me of what it is to be human, in no particular order:

I learned to cook some Thai dishes from a 14-year-old village girl wearing a Yankees hat while a black kitten the size of my fist nuzzled my belly. The kitten felt as delicate as a little glass ball, so instead of holding her normally I cradled her with the tips of my fingers.

I drank 28 cups of teeth-melting instant coffee—one for each morning I was there. My plan was to relax and enjoy a leisurely cup of coffee before each hike. I never finished one cup—you can’t keep an elephant waiting.

I hit 20 walls on 20 strenuous hikes and I kept going. This means that 20 times I thought I could go not one step further… and I went on hiking for hours after that. On hike number 21, there were no more walls.

I drank tea in the forest out of mahout-crafted bamboo cups that were warm on the inside from the tea and hot on the outside… from the heat generated by the machete steel that had been chewing into the wood only moments before.

I learned a few dozen words in Packinyah, the language spoken by the Karen people here. There is no other part of the world that speaks the language, so the utility of this knowledge is limited. But it’s kind of cool that this is the one place in the world where the word for dog is “chewie”—and because of that I will never look at a dog again without thinking of a Wookie.

I walked by water buffaloes (think cows) staring at me with expressions that seemed straight out of Munch’s The Scream painting, cow version… I felt powerless because I couldn’t “save” every one of them.

I awoke in the middle of the night to gunshots reverberating through the jungle. I was told that some of the men of the village hunted deer at this time. I hope they missed. Sometimes they drank rice whiskey before hunting. I thought of a booze-charged errant shot thudding into an elephant.

I sat in the clouds on the edge of a mountain while listening to a gibbon (a type of ape) call, at the same time that I watched a mahout blush as he was asked (and teased) about whether he liked or didn’t like a particular girl. While he stammered to answer the ape whooped from the trees.

I saw trees in the jungle with bark that seemed to have grown outward-jutting spikes. To defend themselves against what? 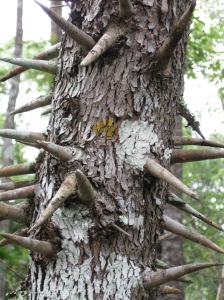 I watched Schindler’s List on a screen fastened to a bamboo wall at Base Hut. One of the trips I took right before this one was to the Auschwitz death camp in Poland. On the next day’s hike I couldn’t get the image of the room at Auschwitz filled with human hair out of my head, the thousands of tangled and moldering scalps. I left the hike early—the only time I did that.

I bought thin cheap Thai chocolate bars at a “store” that was really someone’s house in the village. Under the circumstances, in that world, it tasted like expensive French pastry.

I saw elephants climb and descend mountains, and each time it would take my breath away: the way the elephants step, tentative, testing each foothold, the slow shifting of their weight, the look of concentration on their faces, the startled look when they slip, the flailing if they stumbled… all of these movements and all of these feelings—concentration, determination, fear, surprise, helplessness—were utterly human-like.

I participated in four volunteer “quiz” trivia competitions. My first partner was the Base Leader Gemma. She said to me, “I hope you’re not competitive.” I said, “No, not really.” Meaning: “If we don’t win, I will ask the elephants to bury us, because I will have to kill both of us.” On the fourth quiz I was sure that our team had won. When the final tally came in… I could hear the elephants out back, digging graves.

I used this phrase when conversing with people from the United Kingdom: “Fucking Brits.” It’s a term of endearment cloaked in a hoodie of irritation. The genesis of this phrase was the above-mentioned quiz and getting this random and impossible question from Ian, moderator of the quiz and a Brit: “What is the southernmost active volcano in the world?” He followed that gem with five questions about European football.

I whispered to the baby elephant Lulu at two o’clock in the morning—everyone asleep except for me and her. 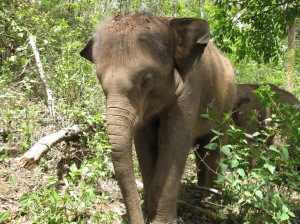 I saw songbirds once, just traces of them at a campsite. All that was left of them was wispy piles of blue and red and yellow, like the remains of an assassinated rainbow. The mahouts had shot the birds out of the trees and plucked them to fry them on the campfire. I knew if I told them why I was upset they would look at me like I was a space alien. In that moment I felt like a space alien.

I played poker while clouds of bugs thudded into me so often it was as if it was raining bugs. The “rain droplets” were not your typical droplets, though: sometimes I’d get thwapped with a little flying ant, sometimes I’d get fwumped by a big black beetle that wanted to eat my face. We dealt the face-eating beetles into the poker game. One of the beetles got an inside straight and he swept up the winning pot with ten spindly black legs.

I read one note card written by my girlfriend on each night I was in Thailand. There were 32 personal notes telling me in different ways what I meant to her and how much she missed me. Each day I read one I felt like she was standing right beside me and I could feel myself smiling so big that it hurt my face.

I saw up close what an elephant looks and sounds like when it’s frightened. His ears were out and stiff, his tail up and ramrod-straight, he was snorting and trumpeting as he took a few steps backward uphill. The elephant was scared by a stray dog that was a little bigger than a chihuahua, and the dog was not aggressive in any way. This made me realize that fear can strike down anything.

I fell asleep each night huddled in my little mosquito net with my laptop actually on my lap, watching an episode of Mystery Science Theater 3000. It was my Western civilization comfort food.

And I’ve now seen many elephants up close and I’ve touched them, but even better than that: I have stood still while elephants looked me up and down… and they touched me.

Those are some of my “tears in rain.” Maybe not quite as dramatic as “attack ships on fire off the shoulder of Orion,” but then that’s just a line in a movie… and I can die knowing an elephant hugged me. 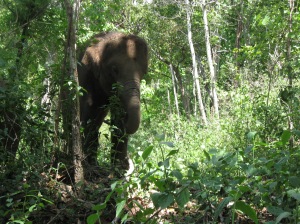