From Wikipedia Commons. http://commons.wikimedia.org/wiki/File:2pigs.jpg
By Titanium22

I got sober from drugs and alcohol in 2000. In the process of recovering I realized that from then on spirituality was going to be an important focus of my life—that it had to be, since the connection to a Higher Power was necessary to keep me sober and alive.

I didn’t realize that recovery would connect me to myself as well, to what was really inside me.

During the early part of my recovery I realized that spirituality could be an open field to play on. I grew up around Catholicism and I didn’t feel like it was that way at all when I was young. I realized that my Higher Power could be one of my own understanding—that I had a lot of room to explore.

So I started exploring. One day I was reading a passage written by a Buddhist monk that was addressed to people of the West. I came across this section where he wrote (I’m paraphrasing):

Can you be a spiritual person if you are participating in the cruelty and suffering of animals by eating them?

This is the first time that it really sunk in that there was a possible connection between spirituality and not eating animals.

Months after I read this passage, I was talking with a friend of mine, and she mentioned that she had become a vegetarian. When I asked what had sparked her conversion, she said it was her cat. Her cat? Yes, she couldn’t look at her cat after eating a plate of meat. She felt guilty.

I thought about my own cats. Through my drinking years, my cats were probably my one shred of connection with anything remotely spiritual. I adopted my cats Bandit and Hooper in 1995.

Bandit on the left, Hooper on the right.

The one constant was the drinking. And the cats.

No matter how self-loathing, self-destructive, self-pitying I was… they crawled into my lap, purred, and loved me.

I realized they were not just pets. They were family. And they had carried me through. What love I had to give was given to them. What love I could receive was through them.

What spirituality I had was given to me was through taking care of them.

When I awakened from the nightmare of drugs and alcohol, although it wasn’t in my consciousness, I think deep down I was aware of this bond that had been formed.

What these two little animals had done for me.

As I recovered, grasping for my own image of what a spiritual life would look like, I realized that my empathy for all animals (and humans, for that matter) was deepening. That caring for animals was going to be one of the core principles in this spiritual life I was trying to live now.

I was told that in order to recover from drugs and alcohol I had to have a complete psychic change.

I think this was starting to qualify as one. I think I wanted to become a vegetarian.

But was it even possible to not eat meat? That was the thing. I wasn’t sure. Which, in retrospect, was silly—alcohol was the biggest obsession of my life for almost 20 years and I wasn’t drinking anymore.

For the first time, I thought about what I was eating. I thought about if I even really liked the taste of meat. This is not a silly question. Looking back, I hated the taste of alcohol—all of it, from cheap beer to hundred-dollar-a-bottle whiskey, from my first drink to my last. That’s the truth. People talk about how refreshing beer is or wax poetic about wine—I don’t get it. I drank to get drunk, to wreck myself, and booze was always hard to get down.

Was it the same for meat? I liked a good burger from time to time. I liked pepperoni on pizzas. But did thinking about this stuff make my mouth water? No. The inherent flavor of meat—the taste of the flesh itself—was that something I enjoyed? I didn’t think so. If I ate a steak I wouldn’t enjoy it unless it was doused with spices, external flavorings.

Raw meat absolutely repulsed me. I had a hard time buying it at the grocery store.

I was starting to think it was possible to quit meat—to realize that the flesh itself wasn’t really something I needed or even wanted.

I joined PETA but wasn’t interested in watching any of the graphic videos they sent me. That stuff was too extreme. On the other hand, I was interested in the founder of PETA, Ingrid Newkirk. She was obviously a person who cared deeply about animals, a kindred spirit, and I was interested in what made her decide to do what she was doing. HBO broadcast a documentary on her life and her work called I Am an Animal and I decided I’d try to watch it. I figured I could fast forward through any of the “rough” parts.

One of the images I recall was video of an adult cow in a slaughterhouse. I realized I had never seen what the inside of a slaughterhouse looked like. The cow was terrified as it was shoved out of a door onto the floor of what looked like a warehouse. 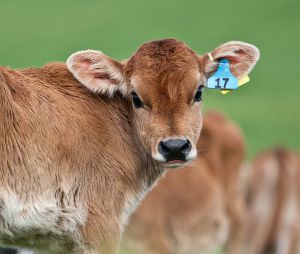 I held my breath. I didn’t fast forward. I couldn’t look away.

The cow was wounded, flailing. It was trying to get to its feet but it couldn’t because the floor was a lake of blood. I could see it screaming.

I saw a monkey held down in a lab. I couldn’t tell what were the monkey’s limbs and what were restraints or electrodes. Its whole body looked stretched out and pinned. The monkey screamed as it was prodded with something.

The other scene I recall was on a mink farm. The face of a tiny, ferret-looking mink was in close-up in the foreground as a man’s boot came into frame. This man stepped on the mink’s skull first with one boot, then brought up the other one. The rodent struggled, the bones of its skull crunching under the man’s boots, blood gushing out of the mink’s nose. The film then cut to a different mink being skinned alive—I could clearly see the animal’s mouth opening to scream with each stab of the knife.

As I watched this… out of me came this sound. It was a howl that shook the room. My cats fled in terror and I could only imagine what my neighbors thought. Nothing that’s come out of my lungs has ever been that loud, lasted that long, or come from so deep a place. Then I burst into tears.

The next day I was a vegetarian. Over time I have become a vegan. I have never looked back, and could not live any other way.

I know now that this was a profound spiritual experience. The only comparable experience I have ever had is my moment of clarity about my alcoholism—a sort of “burning bush” that some, but not all, alcoholics experience. My burning bush was a voice in my head: If you keep drinking, things will get worse.

A simple truth perhaps. One that the whole universe was aware of—I was the last person to find out. But for me it was a thunderclap of wisdom. This was a thing that I knew to the core of my being—it wasn’t just a fact, it was a part of me.

In both of those moments I knew I had to change. That I must.

In both of those moments, I discovered connection again. To a Higher Power, to myself.