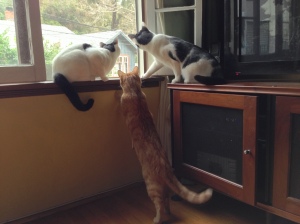 THE 10 MOST AWESOME THINGS ABOUT HAVING CATS:

THE 10 MOST NOT SO AWESOME THINGS ABOUT HAVING CATS:

And the biggest myth about cats I’d like to dispel: the one about cats being ‘aloof’ and not capable of forming a real bond with humans.

It’s real simple: you get what you give with a cat. 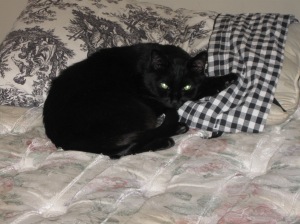 In honor of Halloween and my wonderful black cat Bandit, who passed away two years ago:

and I know you fear me

I prowl down moon-raped avenues

I prowl alongside broom-ridden witches

I prowl under ladders, over sidewalk cracks, on

That’s what you think

You humans think I’m the devil

You humans think you know everything

You humans are black cat

can kiss my black cat ass.

Lock up your daughters

I’m coming for you

will you please adopt me?

And I know this: 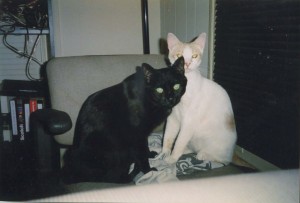 Bandit on the left, Hooper on the right.

Recently I found this video that someone sent me a while ago (re-posted below), and it reminded me of my first two cats, Bandit and Hooper, and how they would wake me in the morning.

I adopted both cats in the days when I was drinking a lot. Bandit was part of a litter of black kittens that was thrown into a dumpster. Luckily the dumpster was behind an animal grooming business, so the kittens’ mewling complaints were heard by the right people. Bandit was my first cat.

Hooper I got at a pet store adoption event, but it took two tries. The first try he purred, nuzzled, and licked me when I petted him—and I chose a beautiful gray kitten with blue eyes over him. The gray kitten didn’t give me anything, no affection, he hardly even acknowledged that I existed on the ride home. He was like a beautiful painting of a kitten. But men are like cats in that I went for the shiny sparkly one over the one that was the best for me.

When I got home there was a message on my answering machine—this was in the 90’s—informing me that I had inadvertently kidnapped the gray kitten. He was supposed to be at the pet store for a grooming, and he got mixed up with the adoption cats. I probably could have ransomed him back, he was that beautiful.

When I returned the gray stunner, Hooper jumped into my arms—to make sure I got the message this time.

When I brought Hooper home to meet Bandit, it was the easiest cat introduction I’ve ever had in my life (and I’ve gone through a few by now). They both liked each other almost immediately. They made a good team.

Based on some information I had, it was likely that Bandit was part of a Hispanic family—until they decided to throw him out. Hooper’s origins were a complete mystery, though he had an odd bent tail that I thought might point to a wild and dangerous time out on the streets.

Of the two of them, Bandit was slightly dominant, but he was laid back about it—the cool, behind-the-scenes leader.

I was an erratic father to the two of them because of the drinking. I had a lot of love to give, but it was stuffed under twenty layers of armor. I was a knight stumbling blindly along, always about to teeter over… and land on a yowling cat.

I was terrible about feeding them breakfast on time, especially on the weekends. My hangovers were like bombed-out buildings, and on some weekends you couldn’t dig me out of the rubble before two o’clock.

Feeding time for the cats was at eight in the morning.

I suspect after the first dozen or so times of me feeding them so starvingly late, they figured something had to be done. Here’s how I imagine it might have went down, with my Mexican-American black cat, Bandit, and my streetwise one, Hooper:

BANDIT: Hooper, my compadre. look at eem. He’s not moving.

HOOPER: Oh, give me a break. I’m fucking famished too. You know, I’ve been thinking… maybe it’s time to do some serious pooping outside the litter box. Send him a message.

BANDIT: Um… do you mean “thinking”? Thinking outside the box?

HOOPER: No, I mean Cheesing the Mousetrap. Down-Periscoping the Submarine. Warming the Porcelain Globe.

Bandit sits on his haunches, blinking at Hooper.

HOOPER: Well shit, yeah. I mean, what the hell, did you go to cat finishing school or something? I’m from the street, my friend. Look at this tail. Of course I’m literal. I could literally eat a fucking dead horse right now.

BANDIT: Yes compadre, me also… but I don’t think Dropping a Doom Ring would do anything except get us sent to the vet…

HOOPER: Hmm, you’re right about that. Don’t you love how he throws a treat into that cat carrier prison when he tries to get us to the vet? Like that’s gonna fool us. Oh yeah—no thanks, dude. I ain’t going to jail for some Fred Flinstone-looking vitamin shit treat. Seriously, who does he think he’s dealing with?

BANDIT: Yes, yes, compadre… But what we need is a plan… okay… here’s what we’re going to do… 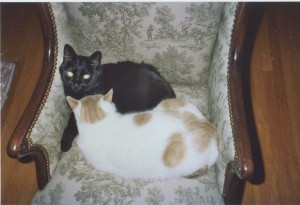 And after that meeting, when I was in those dozes that were like drowning in my car at the bottom of the Chappaquiddick River, I would feel this wetness on my ear, like the kiss of an angel…

…actually, it would be the wet nose of my cat Hooper, as he tried to gently nudge me awake.

I’d swipe at him—not to hit him or anything, but to force him off the bed—and he would jump down.

Bandit would watch from a high place, like a window jamb or the top of a book shelf. He was the general on the mountain top, while Hooper would launch sorties into the lumpy fortress of my hangover. I imagined Hooper was disgruntled and resentful, assigned the dirty work of stirring me from the deep caverns of my boozy sleep… while Bandit would sit up there and egg him on: “You’re doing great, compadre, doing great… just one more time… don’t worry, my friend, I have your back…”

Generally, it would take five to ten tries. Hooper would wet nose-stamp my skin, paw my scalp, lick his lips in my ear, or—my favorite—my eyes would flutter open to witness the Cat Stare, that peeling metal look that cats share with convicts.

If that didn’t work, then Bandit would basically yank the “fire alarm”: he’d jump up on me and march back and forth over my body crying and yowling, the cat version of cursing a blue streak: “What the fucking-fuck?! Seriously, this shit is old! We’re so hungry we’re crapping mouse toys! My food bowl just laughed at me! Get up, you bastard! I mean, god damn it, what the hell does a cat have to do?”

“I still say we should start pooping everywhere,” Hooper would add. “Maybe poop on his head.”

Bandit takes a breath before unleashing another string of obscenities at me.

Bandit cursed at me like this whenever it took me really, really long to feed him and also when I played AC/DC on the stereo. Anything by them. The first chords would rumble through the speakers and he’d be in my lap, swearing up and down at me. “This godforsaken head-bashing shit again?! Can you please lighten up? I’d give my left paw for some Julio Iglesias. Seriously—turn that shit off!”—And I would.

One night the cat alert duo was pressed into duty in the middle of the night. I stumbled beer-soaked and blind into the apartment at three in the morning and had a sudden urge for a hard-boiled egg. I threw the egg into a saucepan with a few inches of water, blasted the gas flame…

… and cats screaming in my ear.

I woke up with the apartment filled with smoke. I stumbled into the kitchen. The water in the saucepan had long since burned away. The saucepan—it was metal—had scorched black through and through and cracked open. There was a deep greasy bomb blast scar on the ceiling. The egg had undergone a flash-rotting in the intense heat—it looked like the charred fetus of some hell-bound rodent.

And the fire alarm was shouting the neighborhood awake—but I had slept through that.

It was the cats that woke me up. 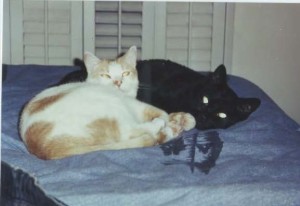 After that I didn’t swipe at Hooper any more when he tried to nudge me awake. I still was late feeding them a lot of times though.

It would go like this: After a few paw bats, nose kisses, and Cat Stares, Hooper would hang it up, slinking off the bed, and Bandit would descend from his perch to take over. At the instant of the tag-team paw slap—that’s when I would get my ass moving.

Now Bandit and Hooper are gone, and with them the best alarm clock I’ve ever had.

The cats I have now don’t wake me up like this. They don’t need to. I’ve stopped drinking. I’m punctual at their feeding times.

BANDIT: Yes, that’s because of us, dumbass. We taught you, compadre.

HOOPER: Damned straight. And we also noticed that you don’t try to pull that stupid throw-the-treat-into-the-carrier crap any more, either.

Direct link to the video on the creator’s website is here. Quality is better I think.