This post is the next installment in a series about my trip to Thailand to volunteer helping elephants.

Being the human that I am, I live in my brain a lot. I approach most everything as if it needs to be mastered, figured out.

In Huay Pakoot when I tried basket weaving, I got frustrated when I couldn’t figure it out.

“If I can just slide this… under here… damn it!”

I tried to teach English to the school children, which was difficult because as a teacher I was starting out with a huge disadvantage—I didn’t know their language. How could I teach them the word “dog” when I didn’t know what the word is in Packinyah?

Not only could I not figure out how to teach them—but what if I said something that made them feel insecure or hurt? What if I broke them, like they were little glass ornaments that had slipped out of my hand?

I felt like a giant crocodile wandering around in that classroom, clumsy and dangerous.

At least I had the elephants figured out. By the third week I knew them by name, sight, and personality.

Mana is a ham. She poses for pictures like Marilyn Monroe.

Mario is easily frustrated and he demonstrates the biggest elephant stereotype that I had going into this trip: he actually trumpets—just like an elephant in a Hollywood movie—and he sounds about the same as a movie elephant. Well, except that when the trumpeting sound is 20 feet away from you, and you can see the elephant’s pissed off expression at the same time that your eardrums are being blasted—you know he could beat out a Hollywood elephant for an Oscar.

Baby Bpee Mai is confident, “his own elephant.” If elephants attended kindergarten, he’d be the one the others followed around because he seemed to have all the answers.

The baby Lulu is the opposite–she seems lost in this new world outside of a tourist camp. Her PTSD-like swaying continues even when she’s foraging in the jungle. But she has the most to gain here, and people volunteering after I am gone will surely see the results of her progress.

Thong Dee has gotten into my blood. Hiking into the jungle to see her is like climbing a mountain in Tibet to see the Dalai Lama.

But in week three something happened that made me realize that I had to get out of my brain. This whole trip had become like a puzzle slowly resolving itself—only maybe it wasn’t the kind of puzzle where I had to figure everything out.

On a hike following the elephants Kam Suk and Kam Moon up a steep, brush-boxed mountain, we found a small meadow on flat ground that gave us a respite from the shoulders-denting hike. We relaxed, guzzled water, and watched the elephants have a mud bath. 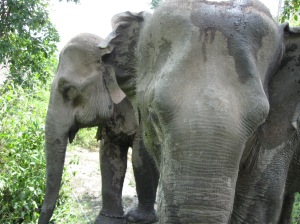 Kam Suk and Kam Moon are a mother-daughter duo that usually forage by themselves. They generally could care less about us volunteers, so we were all caught off-guard when they drifted closer to us.

There was only one way out of this meadow… we found this out when Kam Suk and Kam Moon blocked it.

The mahouts tried, and failed, to stop them.

The elephants padded toward us in slow motion. With the gray-white mud glazing their skin they looked like elephant statues that had come alive just as they were drying.

We backed up to the edge of the meadow… where we had to stop. I felt the knives of a thorny bush digging into my back.

We’re only allowed to make contact with the elephants when they are chained, locked down.

Kam Suk and Kam Moon were chained, but we couldn’t get far enough away from them, from the radius of the chain. The elephants could still reach us. And there was nowhere for us to go, we were cut off in the meadow. The walls of trees and brush surrounding the clearing were too thick to penetrate.

These are not tourist camp elephants any more. They aren’t wild exactly, either, but they’re living their lives here way more on their own terms—not on ours, those of humans.

Trapped in this clearing, we were on their terms.

The elephants plodded a few more steps toward us and stopped. They were close enough to touch. I could see a leech attached to Kam Suk’s giant half-moon toenail. It was groping in the air like it was trying to gauge a jump from a cliff.

The elephants’ heavy-lidded stares fell on us as they brandished their trunks like billy clubs.

Kam Moon’s breath was earthy and hot on my face. Her trunk snaked toward me, patted me from my boots to my shoulders, sniffing all the way. Kam Suk worked over another volunteer.

The two of them were frisking us like elephant cops.

We were helpless, pinned down.

I could hear a low, rolling rumbling that sounded like a slumbering dragon.

It was coming from the elephants, but it was impossible to tell which one. Maybe it was both. When elephants make rumbling noises, you feel them more than hear them. 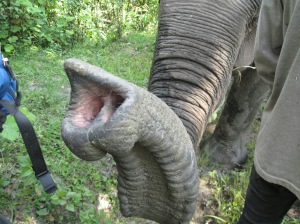 “This thing is loaded.”

Kam Moon swung her trunk from me to her mother. She nuzzled inside her mother’s mouth, then probed in her ear. With my trailer editor brain, the sight of an elephant trunk glomming onto an ear felt like it needed a cartoon sound effect, so in my head I heard the phhhh-ut sound of an object slamming into a pneumatic tube.

This almost made me laugh.

Then the way Kam Moon was digging in her mother’s ear—it looked like a daughter cleaning out her Mom’s earwax—I half expected her to start pulling some treasures out of there. A ball of elephant earwax would make a good bowling ball—or exercise ball for a giant hamster. With Halloween coming up, you could probably carve a really nice jack-o-lantern out of elephant earwax.

It was a comical moment… and whatever tension there was in us volunteers seemed to dissolve away in the rumbling. People began chattering, laughing, pulling out their cameras. Some of the volunteers touched the elephants back.

I fought the urge to “pet” them myself. I was kind of weird about that—for me, touching an elephant was okay, but petting an elephant like a dog didn’t seem right.

The rolling rumbling sound continued. Were Kam Suk and Kam Moon having a conversation together?

Maybe they were forming their own opinions of us, like I had of them. Maybe they were thinking I was a pain in the ass. Or—most likely—they were just expressing their love for each other.

Maybe I wasn’t here to figure out what they were doing, or figure out anything.

Life in Huay Pakoot was turning out to be a different kind of puzzle, one that didn’t need to be worked.

In that moment, I could feel the low-end rumble of the elephants registering inside me.

19 thoughts on “THE ELEPHANT POLICE ARE HERE”